Skip to content
Wow! What a great weekend at Big Snow in Wakefield, MI.
The weather was absolutely perfect, and Big Snow was a real delight! The riding was great too. Besides the trip up to Wakefield, we spent Saturday riding up the North Shore of Lake Superior in Minnesota, and Sunday going up the Michigan shore to Copper Harbor. The scenery was dazzling.
The weather on Friday on the ride up was great, with a few sprinkles early on and then big puffy white clouds scattered across a deep blue sky. 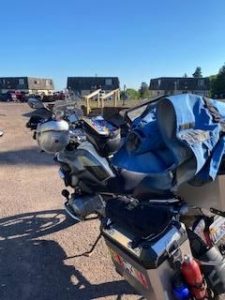 Club members arrived at the lodge between 5-6 p.m. The group also included a few CRBMW members and some folks who had heard about the trip through our club Facebook posting.
We were greeted by Steve Eliasen from Big Snow. He made sure everything we might want was taken care of, and rode with us to show us the sights.
We were met by Sue Rihn, MOA Director, and part of the Madison Club. She and her husband Tom were checking out the area as well. 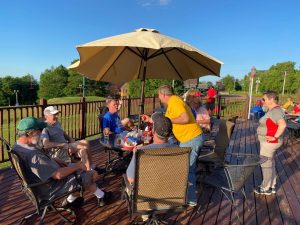 It was great to share with Sue some of the new things we're trying to do as a club.
Dinner was on the expansive deck of Big Snow, with fantastic views and hummingbirds flitting around the tables, heading to and from the feeders. The Friday Night Fish Fry....it was sooo good. Came with homemade potato pancakes with applesauce as well. 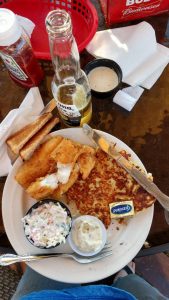 Saturday started out with the group assembling in town, and some heading out on their own while others made their way into the lone bakery to experience a Pastie for breakfast. 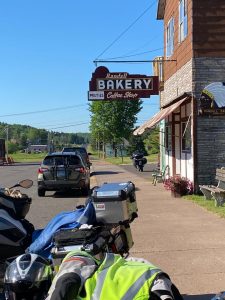 Then it was on to the North Shore of Minnesota, passing through Bayfield WI, skirting Duluth, MN, and on to check out some of the beautiful waterfalls at the state parks along Lake Superior.
The riding was good. Stopping for gas or catching a hot dog for lunch, we were among those who donned our masks during this strange new world of Covid 19.
It was great to see the line of bikes in front and behind as we explored the area. 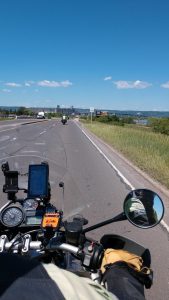 We all met up again at Big Snow for dinner on the deck and watched the sun go down. 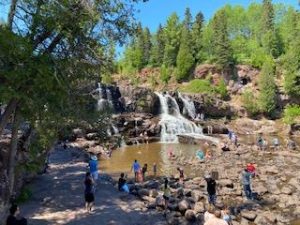 Sunday it was on to the Michigan side of Lake Superior.
We grabbed a quick breakfast at Big Snow, and the group of us headed out with Steve who was anxious to show us the scenic roads to Copper Harbor.
We were joined by a local rider, John and his wife. John, an early Iron Butt member (his number was in the 36,000's where now the numbers are in the 70,000's) converted to a trike Gold Wing, but still rides throughout the U.P. The trike did not slow him down! 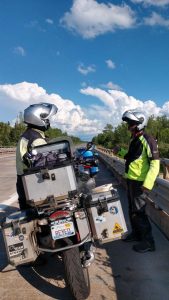 Again the weather was in our favor, with cool breezes off the crystal blue lake. Steve and John took us along the shore and played tour guides with the history of the area and its mining legacy. 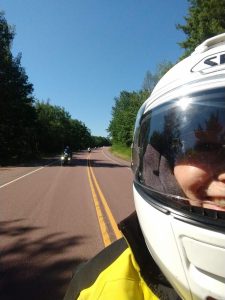 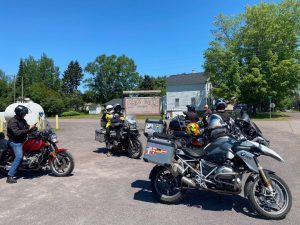